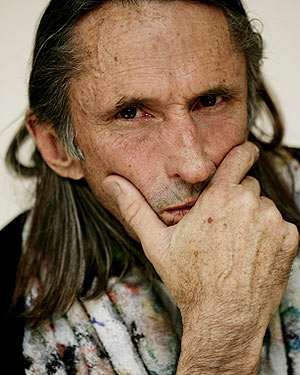 Artist and Musician – Chris O’Doherty (also known as Reg Mombassa) was born in Auckland New Zealand in 1951 and migrated to Australia with his parents and brother in 1969. He has exhibited paintings, drawings and prints at Watters Gallery in Darlinghurst since 1975. Reg also performs with his brother Peter in the band Dog Trumpet.

Chris/Reg began working as a freelance artist in 1976, designing T-shirts and posters for organizations such as Greenpeace, the Rock Eisteddfod, Circus Oz, the Opera House Trust etc.

He has worked closely with Mambo Graphics since 1986 designing t-shirts and posters. The Ray Hughes gallery in Sydney has held two Mambo exhibitions in 1990 and 93.

He designed the ‘Hero’s ‘segment for the Sydney 2000 Olympics Closing Ceremony. The designs included 12 six-metre high inflatables, 2 twenty-metre helium filled dirigibles, 3 stages and 16 inflatable crowd balls. He also designed the image that was used for the lining of athlete’s uniforms and the closing ceremony athlete’s shirts.

In April 2002 Reg was selected by the Melbourne based Visible Art Foundation to have 3 of his works very enlarged to make an installation on the outside of the Republic Tower building in Collins Street, Melbourne.

In September 2002 he commenced a weekly appearance of artwork and writing in The Daily Telegraph until December 2004.

Reg is inspired by the wind, semi-professional birthday clowns, heavy machinery and the behavior of domestic animals. He is married with three children and lives in the inner west of Sydney.